We have SABU, a film director, as the 12th guest for OWNDAYS MEETS. He is the director, author and scriptwriter of the film “Ama no Chasuke”.

Born in Wakayama Prefecture, Japan, on the 18th of November, 1964.
He first appeared in the film “Sorobanzuku” (English title is “The Mercenaries”), directed by Yoshimitsu Morita, in 1986.
He was first starred in “World Apartment Horror”, directed by Katsuhiro Otomo in 1991, and won The Best New Actor Award at the 13th Yokohama Film Festival.
He first wrote the script and directed the film “Dangan Runner” in 1996, which was highly recognised by his close film producer. This film was chosen in the Panorama Section at Berlin International Film Festival 1996 and he also selected as The Best New Director at the 18th Yokohama Film Festival.
He has been creating humorous entertaining films and been contributing to the film industry.
He is also the author of the original of “Ama no Chasuke”, which is his first novel.

What motivated you to be a film director?

I had been an actor for more than ten years and involved in a lot of films. Things changed when I was starred in the film “World Apartment Horror”. The script was written and the film itself was directed by Katsuhiro Otomo. After being given the chance to work with him in this film, I got to feel something lacking somehow.
There was a film boomlet then, and more Video Cinema (so-called V Cinema, which is a film only released by DVD) were produced. I took a look at various films but any of them just looked cheapie to me and I got to feel even angry and irritated with the low quality.
Well, I thought, “I could do even better”.
One day, my wife encouraged me to write a film script saying “You should try writing a piece by yourself”. I completed “Dangan Runner” (meaning “A Bullet Runner”), which is my very first work.
Upon completion of the script, I asked some of my fellows like Shin’ichi Tsutumi and Diamond☆Yukai if they would have liked to appear in my film.They all agreed to join it.
I gave myself one of the roles – the fourth important role. I just thought that someone else could be the director, but the opinion “The scriptwriter should also be the director” was raised from nowhere.
Honestly, I was not really willing to be the director. Anyway, I took it up then found out that it was more interesting than I had expected. Since then, I have been a film director, though it was not my first intention. 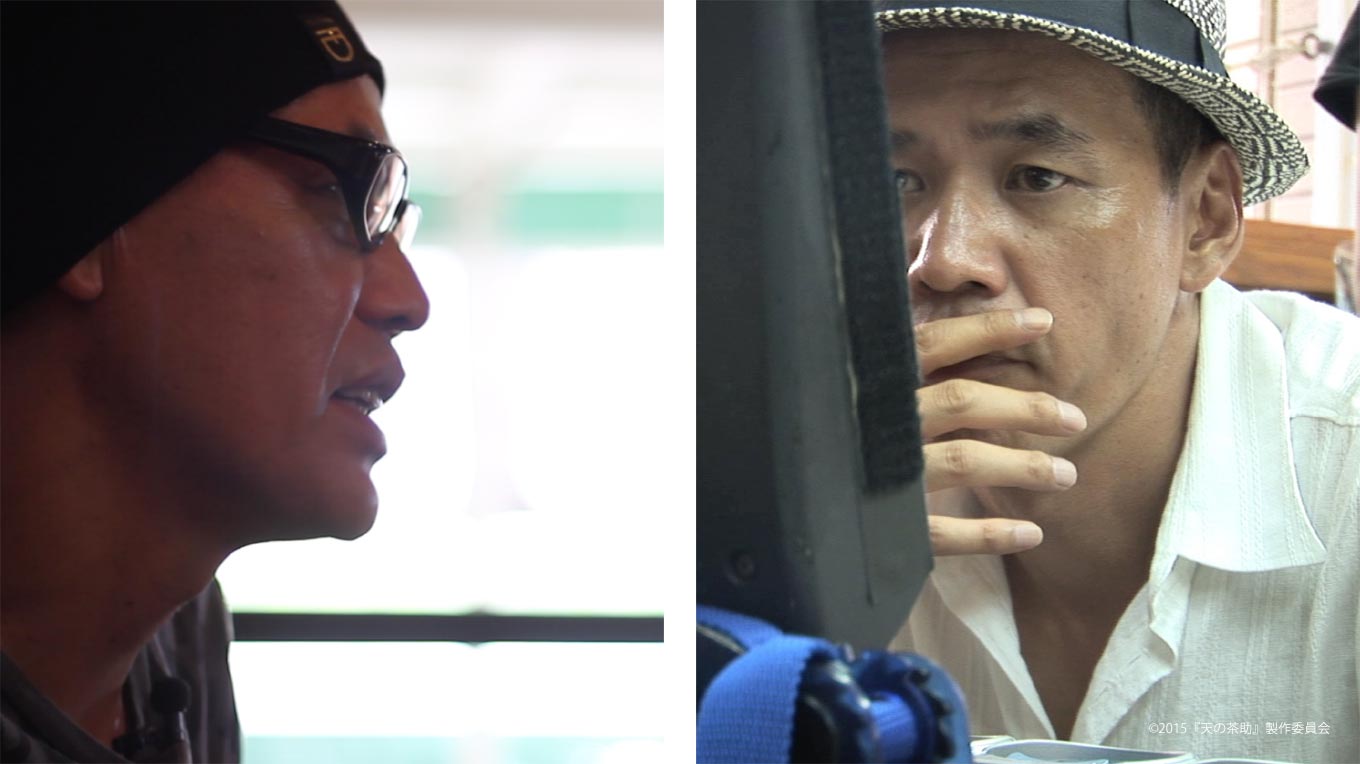 Did you feel scared to shift your career from an actor to a film director?

Not really. I have been good at creating a story and visualising it in my mind since young. I studied design at school and already knew how to draw designs for a series of movie scenes.
I actually used to be involved in the film industry as an actor and understand what the actors are like as well as what other staff members are supposed to do.So, “Oh, this is not that difficult for me” – this is what I felt.

What do you keep in your mind when writing scripts?

Well, I try to keep an objective view.Script is very important for any films. You will know if the film can be interesting or not by going through the script as objectively as possible.
I always correct my script again and again until starting shooting. I often re-do the script which I wrote until the previous day – I wonder,“What’s this? Why is this so funny?” from time to time.
I always ask myself if the story is absolutely interesting or not and correct the script as many times as possible with an objective view. 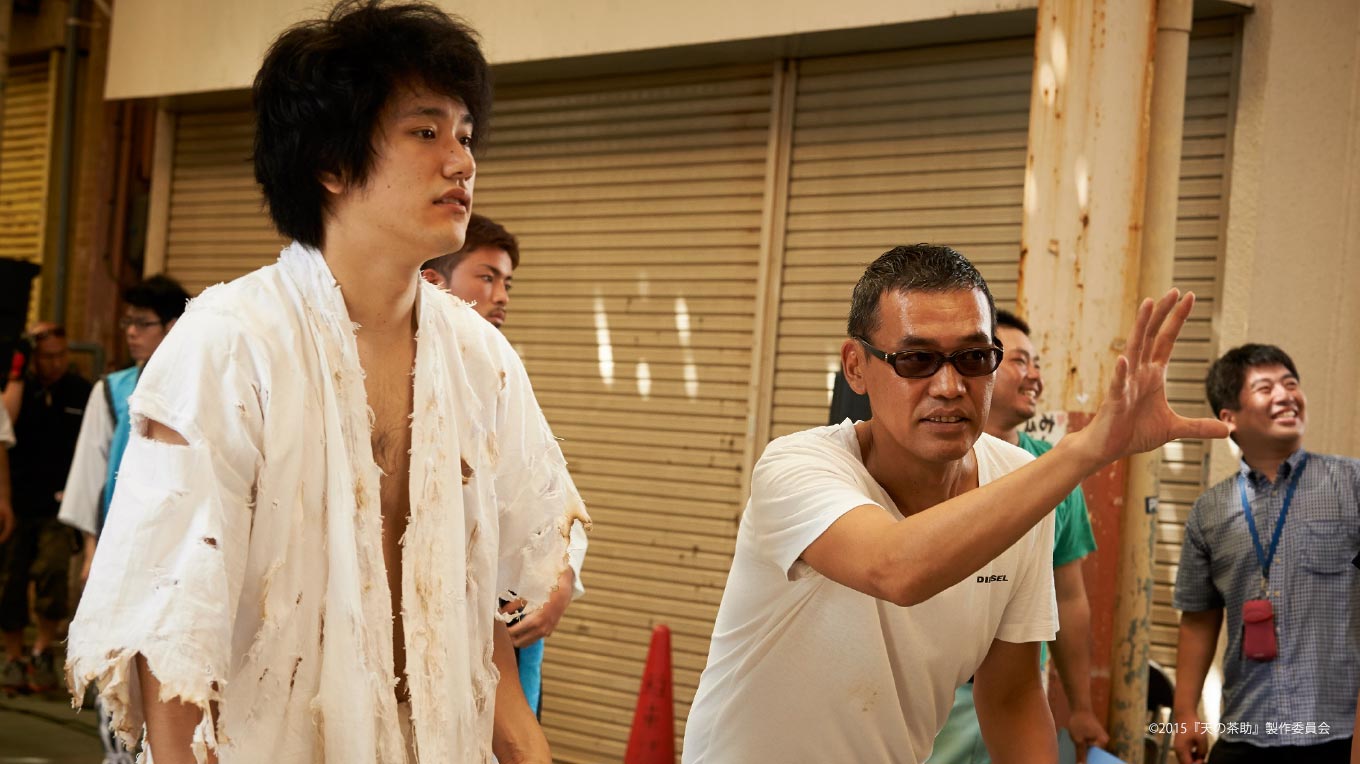 How did you take up the film “Ama no Chasuke”?

I have directed some films of which original were written by someone else. Then, I got urged to try the whole proceedings - from the original novel.I also used to think that it would be easier for me to make it into film if I wrote the original novel by myself too.
I finished writing “Ama no Chasuke” about four years ago. After that, I moved to Okinawa and have seen a lot of beautiful scenery in Okinawa and encountered unique culture and traditional entertainment there.I would have loved to make many of them appear in my films.
I felt that the story of “Ama no Chasuke” got well-matched with the scenery of Okinawa. I then started shooting the film in order to describe the beauty and culture there as well as to convey some of my messages.

What is the difficult part of film shooting?

I do understand that it cannot be helped, but there is so much difference between the visions in my mind and the actual image which I shoot. Upon completing the script, I feel, “This work will be absolutely perfect”. However, after the shooting, the extent of the completeness could just be up to 80%.
The contrary also happens - the film can have a better finish than expected due to the collaboration of each element – the actors play well and the locales also improve the story. Nobody knows what the film will be like until it gets done. 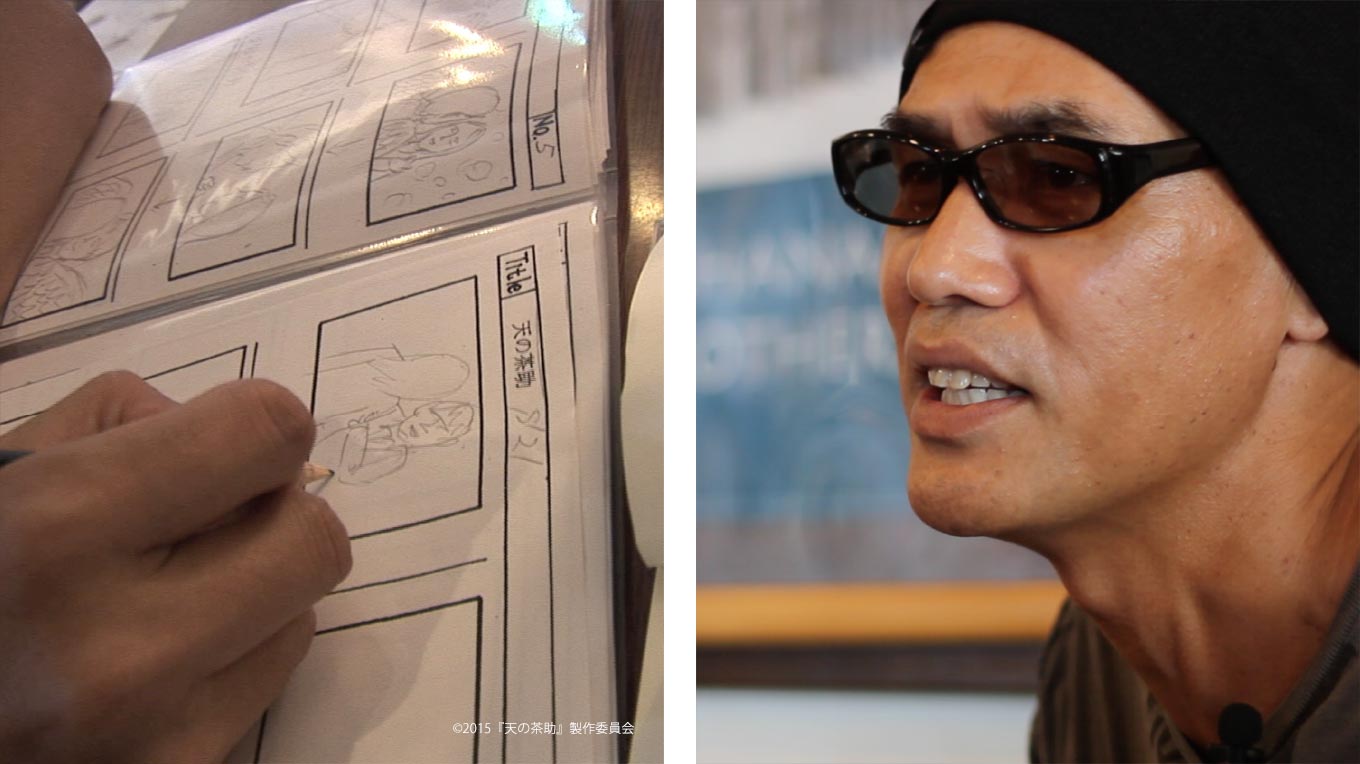 What kind of films would you like to make in the future?

I would just like the audience to enjoy the film laughing, and my priority always goes to if the audience would like it or not. This is always in my mind.“Ama no Chasuke” was submitted to Berlin International Film Festival 2015 and chosen in the Competition Section, but I feel that being chosen is not good enough – once my work is submitted to an international festival, it should win one of the awards – the best one if possible – which will lead to the next success.

How do ideas come to you?

I like getting rid of something fixed like “what it should be like”: each category, such as action movie and detective movie, is easily stereotyped or formatted, but I like doing away with such stereotype and format.I am good at making things away from common expectations. I find it fun to get rid of something existing and creating new stuff: I try to make things completely unexpected for everyone.Actually, this might sound strange, but ideas could sometimes suddenly fall onto me from somewhere (laugh).
I cannot put them into words, but what I have wanted to see and something universal suddenly come to me.
They are still blur and have no shape then, and I put them into shape and make them visual little by little.Once everything clicks at the opportune time, the ideas rush into my mind. This is not that easy yet very interesting.

What is the true joy of being a film director?

I don’t really think myself as a film director.
I would say, I haven’t reached there yet.
I am just amazed at the influence and potential of the films, when thinking about the number of the staff who are involved in my films and the costs to make a film. You can also get out of Japan, get to know the world and widen your world. Furthermore, my works encourage people to enter the film industry.My works change their lives.

A few words for those would-be film directors?

First of all, you will not be able to do better than I do – you would completely be beaten by me if challenging me (laugh).
Besides it, you must have vision of what you want to do and what you want to be like in the future – so called “wish”. This is also the message from me described in “Ama no Chasuke”.
I have liked dreaming and used to be picturing in my mind the ideal image of what I wanted to be like.
However, building up an image is not good enough: you must make detailed plans and take necessary actions to make your dreams come true. Remember to be imaginative anytime.Exercise your imagination in daily life.in June 2015
at HEATH Café

I usually wear sunglasses to make myself look cool (laugh).However, they are almost a part of my face somehow. It is quite amazing. As Mr. Kurosawa (the world-well-known film director) was always wearing sunglasses, it could be “my style” naturally.
One of the necessities – It is similar to a sword for samurai warriors, like a weapon to protect myself.