Famous for his pieces of work which have been adapted to film and dramas including the popular Shima Kousaku manga series, for part 11 of OWNDAYS MEETS we present our guest Kenshi Hirokane. We asked him about his journey from working at a large corporation that led him to becoming a manga artist.

Was it your childhood dream to become a manga artist?

What made you want to become a manga artist?

After graduating from University, I entered Matsushita Electrical Industrial. I worked in the department responsible for producing catalogues and designing the distribution outlets.
Although the company was very interesting, many of the people I met whilst working there were illustrators and designers. Among those people many had ambitions to become a manga artist. While fulfilling this lifestyle, I too realized that I myself also had the same ambitions. This propelled me to do give it a try and I subsequently I left the company. I knew that my parents in my hometown would be dead against the idea so I didn't tell them until after I quit (laughs).
AI was not the kind of person that liked to plan their future. Many of those who become manga artists do what they see in front of them because it looks good, they are drawn to it so they give it a try. In other words, it is a very unstable occupation. People who choose this profession are crazy (laughs).

After you left the company did you start drawing manga straight away? 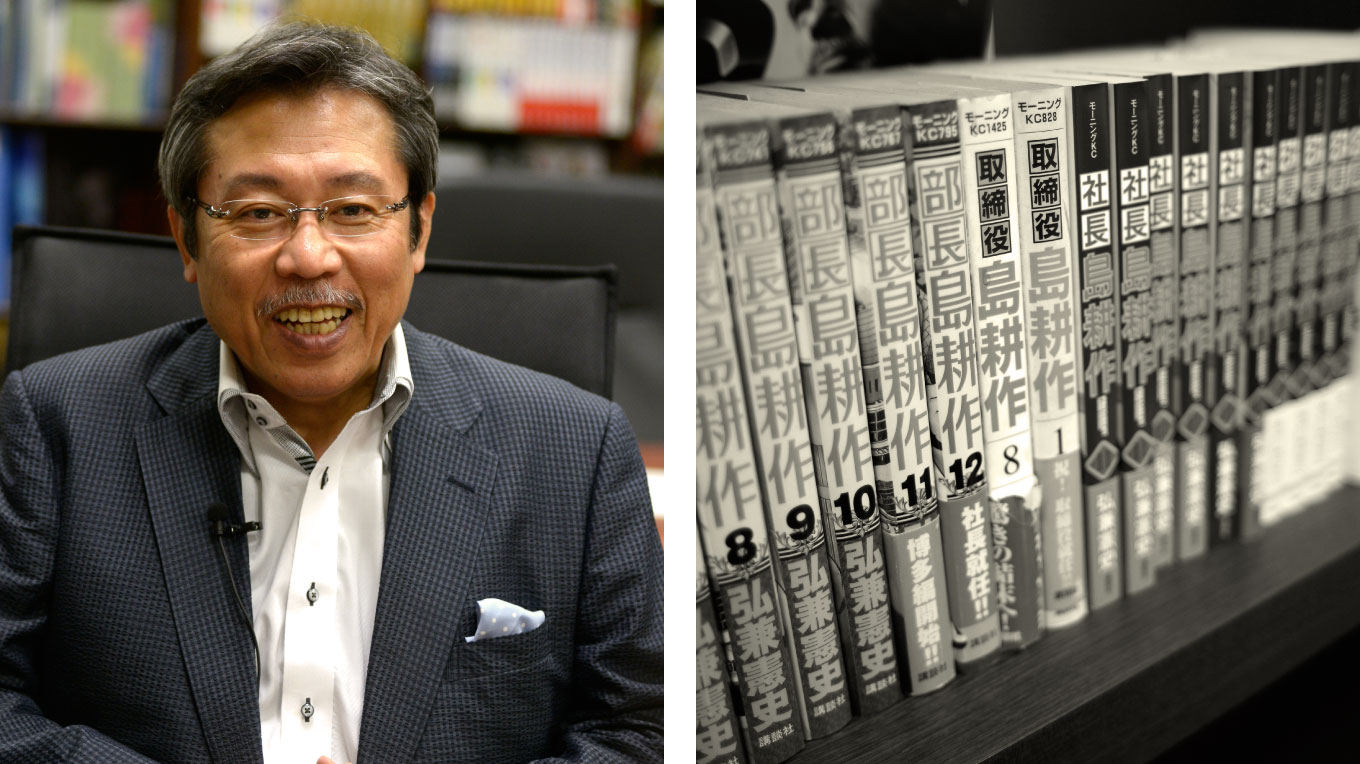 When producing manga is there anything in particular that you focus on?

I think it's mainly realism. It's a manga read by adults with reality projected onto it with problems presented in it. This is a manga that tries to make the reader think and as a result when they do I'm thrilled.

Please tell us how you came up with the outstanding series of Shima Kousaku.

Without having a concept, I set out to write one complete manga book about an office romance. Fortunately it was very popular with readers so it became a serialized manga. Having said that at that time I never thought such a manga about a salary man would become such a big hit. 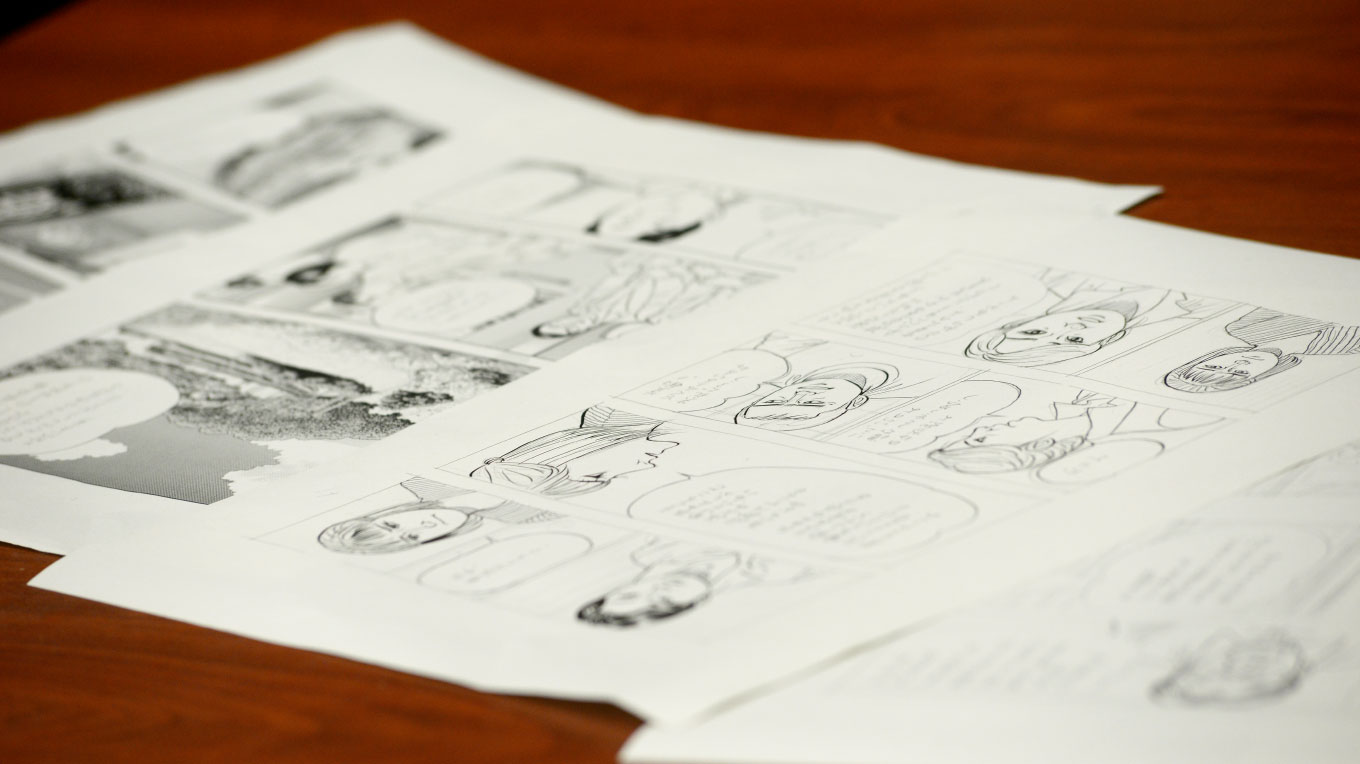 What do you think is the main appeal of Shima Kousaku?

In this manga the main character steadily grows older. For example, in The Glass Mask and Kochikame, the main characters remain the same with each different generation. On the other hand Shima Kousaku steadily grows older. I have a friend who I used as a model for this. He went from department manager to company director, executive director, executive managing director and then President. Shima Kousaku develops at almost the same pace so I think Shima Kousaku's career advancement is quite realistic.
Also, Shima Kousaku is a manga composed of 50% entertainment and 50% on information. During the series events are also set in China and India. Of course in addition to these countries I also visited Russia and Brazil to collect information. China and India appear as a matter of course. However, every week due to radio work, at most I could only spend one week in each location. There wasn't enough time for sight seeing there(laughs). Originally I did want to become a journalist so I enjoyed it.

Is there a theme that you would like to depict in the future?

There are so many themes and being really busy with work I don't really have much time. However, if I had the opportunity I think I would like to depict the historical periods such as Heian, Kamakura, Muromachi and the relationship between sculptors such as Unkei and Kaikei. 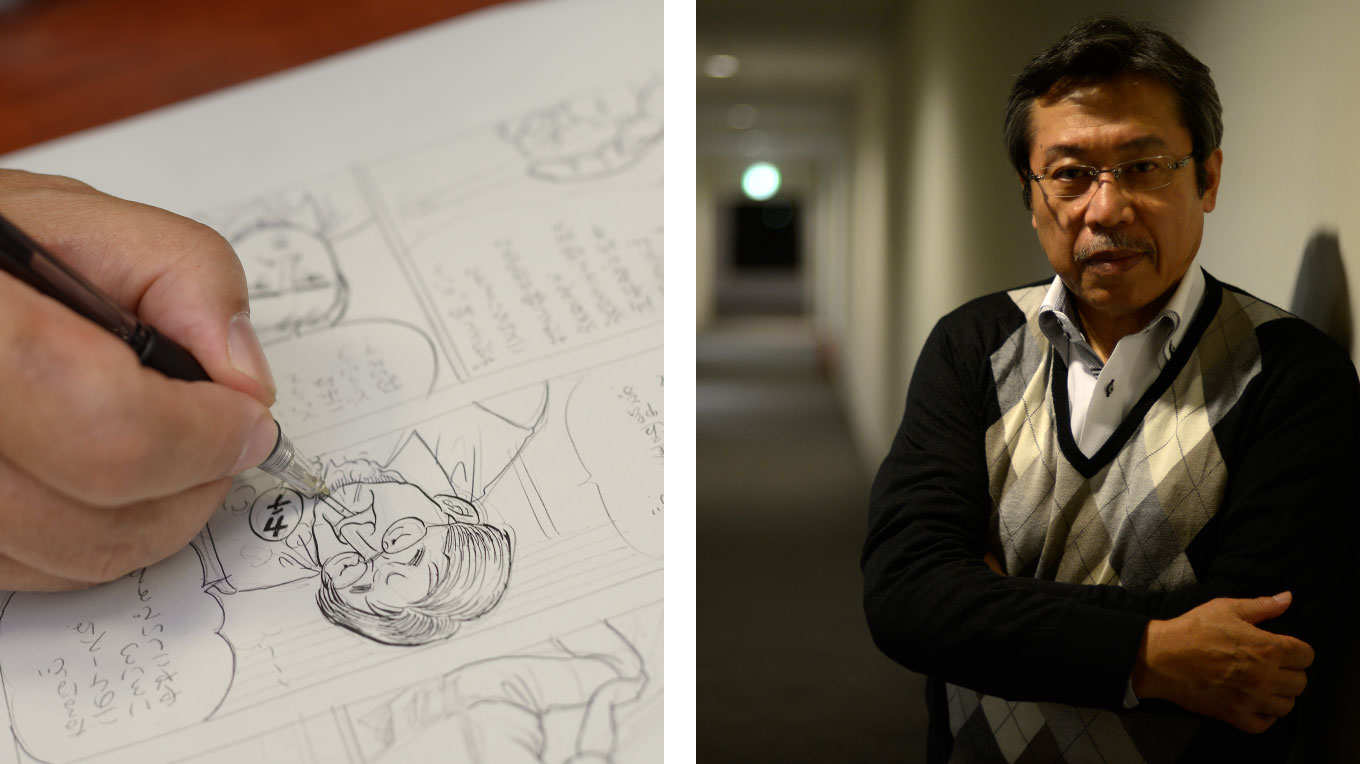 What is the epitome of working as a manga artist?

Just like a product, good and bad manga are reflected by their popularity. When it sells well, you feel that people have accepted your piece of work. It gives you a feeling of satisfaction and makes you very happy. The competetive element is what makes it interesting. You just can't lose focus.
For me, manga is like air that I breathe For this reason, it doesn't matter how tough it is or how little money I make, being a manga artist is what is important.
I never chose this profession for money but rather based on the choice of whether it was the kind of work I enjoyed or not. For example I do not think that the artist who drew for picture shows during the old days made much money. I think that manga is a similar kind of profession which I continue to do.
If anyone is worried about the kind of work they want to choose, I would like to encourage them to do what they enjoy. I think that even if you are really poor, anyone who achieves great satisfaction and fulfillment can continue to do it as a form of work and therefore be happy to enjoy their life to the fullest.Interview : October 2014

I started wearing glasses from around second grade of middle school. At the time I would read books throughout the night. However, unlike today the florescent lighting was dark so I think my eyesight might have become poor very quickly. Wearing glasses is also the same. Since I do work that involves drawing manga and do many tasks that require attention to small details, I choose glasses that emphasise lightness while placing as little stress on my eyes as possible. Also, one thing that I really dislike is glasses that are heavy and leave a mark on my nose. So I like glasses that let me forget that I'm wearing them. Glasses made today seem to be just that, they are so light that you don't even realize that you are wearing them. This makes them very comfortable.