Our guest in Part 19 of OWNDAYS MEETS is an up and coming Japanese painter, Komatsu Miwa. Komatsu’s works, which depict the idea of life and death as a common theme, have attracted a large following both inside and outside Japan. We speak to her about the stories behind her works and of her plans for the future.

Komatsu Miwa is a Japanese painter from Sakaki, Nagano. In 2010, she showcased her works featuring the idea of life and death in the Young Artists Japan Vol.3 and had received rave reviews from the fashion world, earning her much global limelight. In 2014, Komatsu dedicated her work, Shin-Fudoki, to Izumo Grand Shrine. She also held her first solo exhibition in Tokyo, followed by another solo exhibition at the Ueda City Art Museum in her hometown, drawing approximately 10,000 visitors in total. In 2015, her collaboration work with Ishihara Kazuyuki won the Gold Award at Chelsea Flower Show, the largest gardening event in the world. The work has since been part of the collection of the British Museum. In 2016, Komatsu held numerous exhibitions in New York, Hong Kong and Taiwan. She now splits her time between Tokyo and Nagano and is hailed as one of Japan’s leading artists set to shine on the world stage.

What made you decide to become a painter?

I have been drawing since I was young. Back then, Nagano Prefecture was second to Japan in terms of having the most number of art museums and galleries. As such, my mom would bring me to see art exhibitions during holidays or whenever we had time. Besides enjoying drawing, I also realised that there was an entirely different world on the other side of a painting. That was when I decided to become a painter.

How did the unique theme depicted in your paintings come about?

I grew up with animals so I was aware that animals would pass away sooner compared to human beings. When the animals died, I witnessed the moment when the soul left the body. Shortly after, my grandfather passed away when I was 18 and I also witnessed that same moment when the soul left the body. At that time, I had come to realise that human beings and animals were the same after dying. The souls would leave the bodies and go to a world where they would all be equal. From then on, I began using the idea of life and death as a common theme in my paintings. 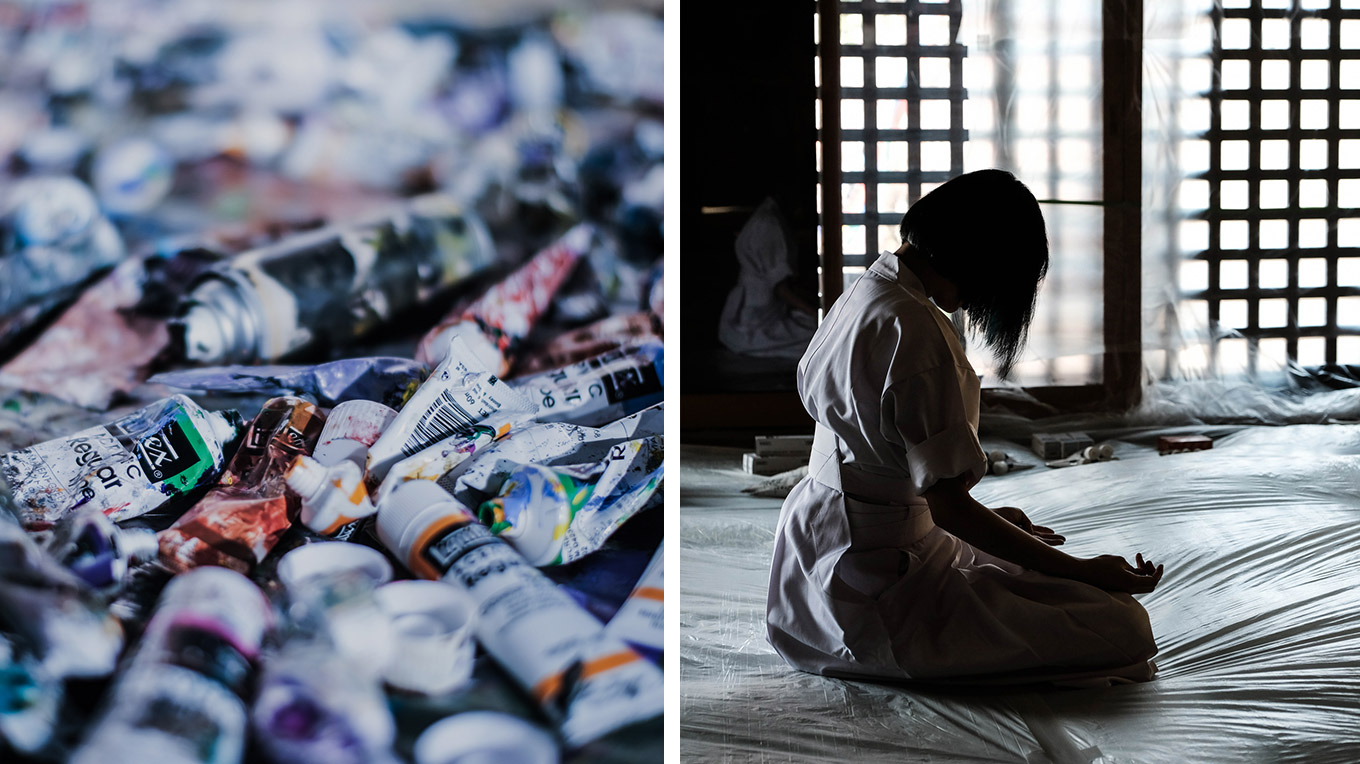 Was there any story behind the making of Shin-Fudoki, the painting that was dedicated to Izumo Grand Shrine?

When I visited Izumo Grand Shrine, the family of the guide suggested to me the idea of dedicating one of my works to the shrine. I thought it would be good to live in Izumo if I were to create a painting to dedicate to the shrine so I rented a vacant place near Izumo Grand Shrine and the auxiliary shrines for a month to paint. There were many primeval forests on the surrounding mountains and, to me, it was a refreshing change from the mountains we have in Nagano.
I felt like I was travelling into the mythical world depicted in Izumo Fudoki every day. I felt that the story continued on even though Fudoki ended halfway. This was the reason I decided to paint Shin-Fudoki. Shin-Fudoki is a painting inspired by my experience on this sacred land.

What made you decide to hold events overseas? 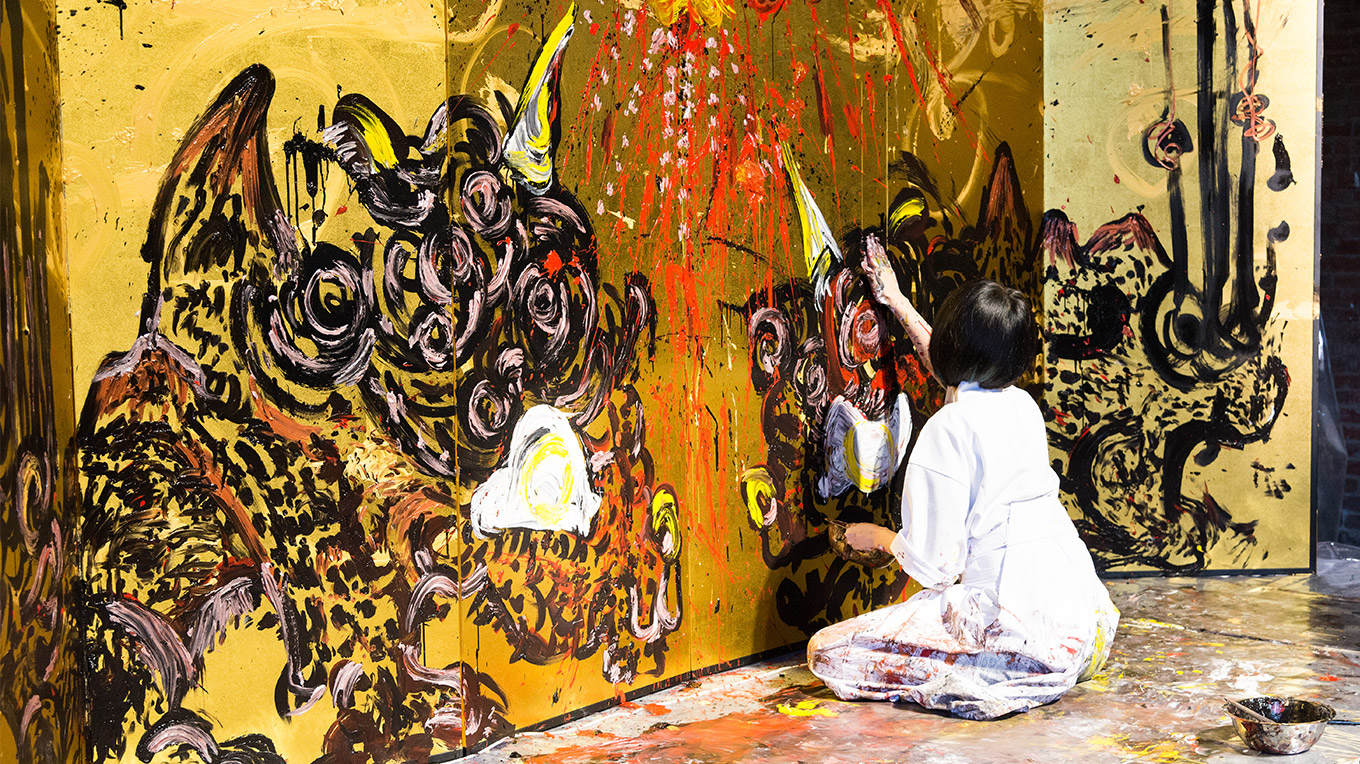 What do you value most as a painter?

Praying and meditation are very important to me. Painting the sacred spirits has made me who I am today. I’m very thankful for these sacred spirits and for being able to transform their invisible existence into my paintings. Praying is very important as it is a way for me to repay their virtue.
Before I work on a painting, I would do a mantra meditation to open the third eye. Essentially it is to thank the local gods before I start painting. This allows me to be connected with the sacred spirits of that land and gives me many inspirations beyond the nature or my own abilities. When I paint in different countries, people have commented that the vibe of my paintings have changed even though I plan to paint like I would always do. Perhaps this is due to my connection with the sacred spirits of that place. 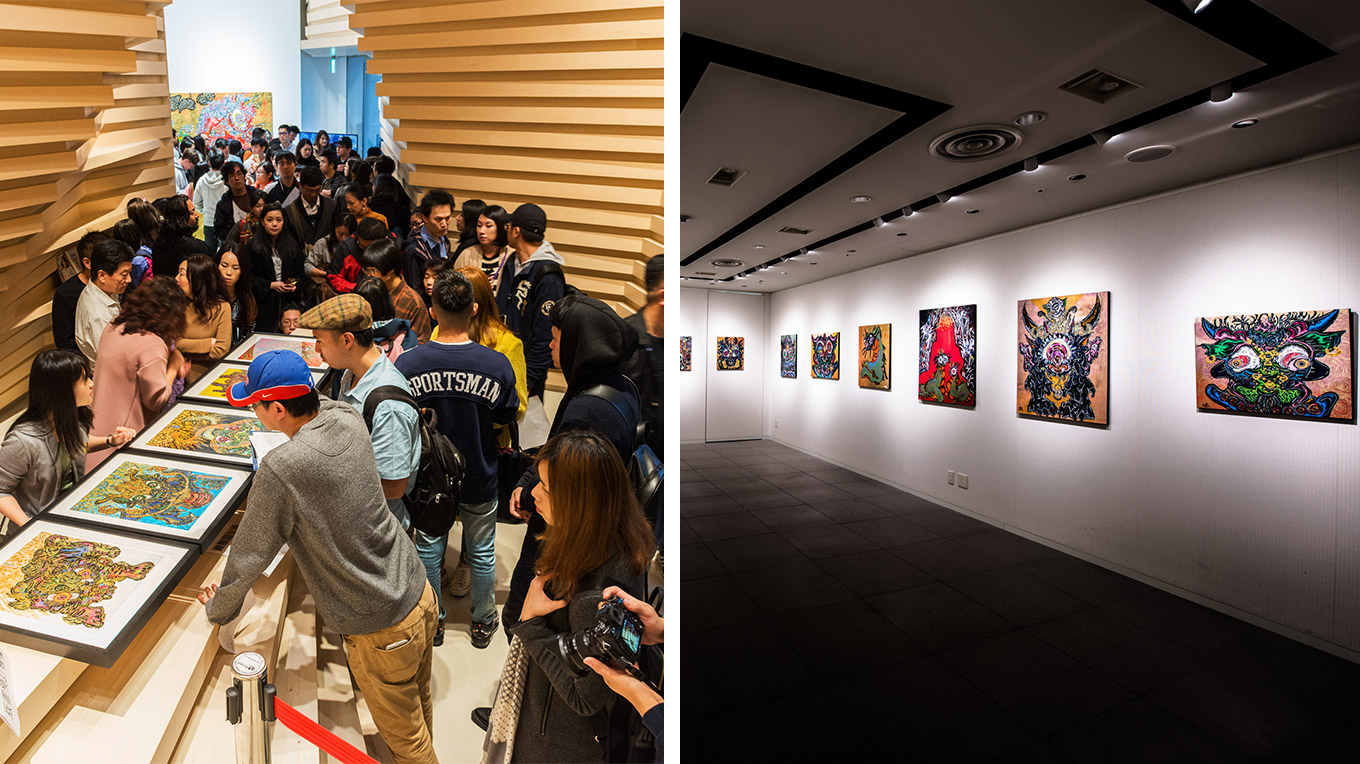 Is there anything you would like to challenge yourself to from now on?

My works right now are mainly 2D paintings. However, the guardian lion-dogs and other mythical creatures I see in other countries are mostly outside in 3D so their existence is closer to humans. For that reason, I plan to create 3D works in the future so as to make these mythical creatures which have been protecting the sanctuaries closer to our world.

I usually wear glasses, even when I’m working. I would go for something which doesn’t slide down when I look downwards.
I picked this pair that was made in Japan because it is very well made and it embodies the essence of Japanese craftsmanship. It doesn’t slide down easily and doesn’t cause any discomfort on my ears. In addition, I think it has a slimming effect on my face because I’ve received comments that I look slimmer since I started wearing this pair of glasses.